Henderson back at Greensboro Woolworth

Clarence Henderson, one of the key figures of the early civil rights movement in America, is the featured speaker at the DuPage Township Republican Organization Lincoln Day Brunch on Sunday, March 24. The event will be held at the Bolingbrook Golf Club on Rodeo Drive from 10 a.m. to 2 p.m.

Henderson participated in the now famous 1960 sit-in at the Woolworth lunch counter in downtown Greensboro, North Carolina. On Feb. 2, he and William Smith joined Joseph McNeil and Franklin McCain, classmates from North Carolina A&T State University, at the then-segregated counter. By July, the store manager, faced with falling sales, served three of his black employees at the counter. Other Woolworth stores and businesses across the South, facing sit-ins inspired by the Greensboro protest, soon integrated. 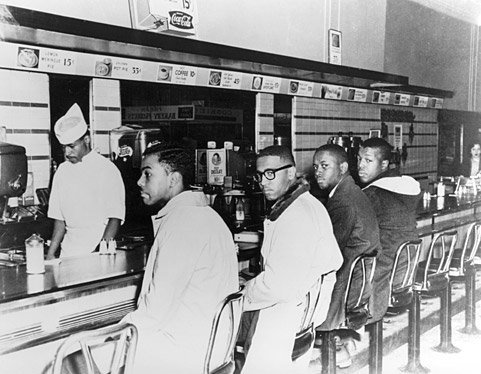 Since then, Henderson has enthusiastically promoted excellence among youth through his volunteer work with the Boys Scouts of America, has led efforts through various organizations to raise funds for North Carolina A&T State University and Bennett College (nearby historically black liberal arts college for women), and has actively participated in raising scholarship funds for graduating seniors at Greensboro’s Dudley High School.

His energetic involvement in his church and his life’s journey as a soldier in the U.S. Army, teacher, college administrator, entrepreneur and motivational speaker have given him a unique perspective on what confronts society today.

In 2000, Henderson was the recipient of the 40 Anniversary Sit-In Participant Award and in 2013 he was appointed by Gov. Pat McCrory to the chairman seat on the North Carolina Martin Luther King Jr. Commission.

Today, Henderson remains a champion for freedom and for conservative values. His message inspires and teaches how to change the narrative in this nation, from “Liberty for a few” to “Liberty for All!”

To order tickets go to https://www.eventbrite.com/e/lincoln-day-brunch-bolingbrook-golf-club-tickets-56155049264?ref=eios.

Want to get notified whenever we write about Dupage Township Republican Organization ?

Sign-up Next time we write about Dupage Township Republican Organization, we'll email you a link to the story. You may edit your settings or unsubscribe at any time.