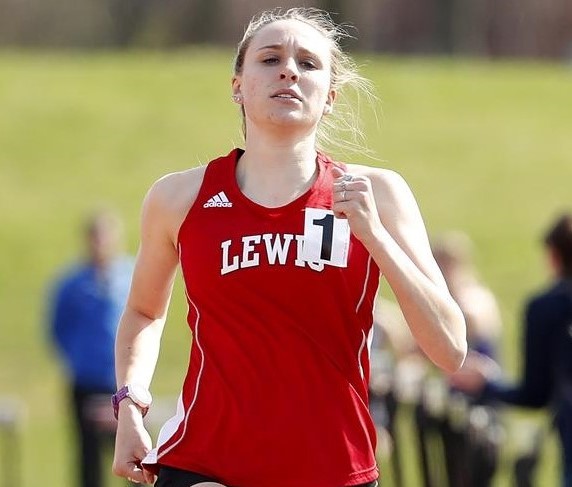 By most standards, Zoe Mead is off to a good start to the season.

After all, the Lewis junior won her first 800-meter run of the outdoor season with a provisional time for qualification to the NCAA Division II Outdoor National Meet. That effort earned Mead the Great Lakes Valley Conference Outdoor Track Athlete of the Week on April 11, according to the Lewis athletic website.

But not everybody has the same expectations as Mead, who thought her outdoor season wood be even better already.

“It has gotten off to a slower start than I would have liked, but I’m looking forward to making progress,” she told the Will County Gazette in an email.

When she won the 800 at the Benedictine Duals on April 8 in Lisle, Illinois, she finished in 2 minutes, 12.81 seconds, which was below the NCAA provisional-qualifying time of 2:13.33.

“I was excited to provo the first time I ran an 800 this season,” she said. “I still have a long way to go to reach my goal time, but it was a good starting point.”

At the Beach Invitational on April 15 in Long Beach, California, running against competition from schools such as Oregon, LSU, Duke and Washington, Mead clocked in at 2:13.82 to finish 46th out of 123 runners.

“Although I didn’t do as well as I had hoped to going into this trip, it was a good experience and exciting to race against such a competitive field,” Mead said.

The 800 has become Mead's specialty at Lewis. In her sophomore outdoor season, she qualified for the national meet and finished 21st with a time of 2:14.87. She also won the GLVC indoor title in the event in her junior and sophomore seasons.

At Princeton High School, she was on the school's 4x800 relay team that finished seventh in the 2011 Illinois High School Association state meet.

Mead said she started running competitively in the fifth grade, when she joined school track team. At first, she just wanted to be in as many sports as possible in her first year of being old enough to join teams.

“As I got older, I found out that I didn’t hate running so I stuck with it,” she said. “Coming from a family of runners has also been a big part of my love for the sport. As my 9-year-old brother would say, 'We’re Meads. It’s what we do.'”

The constant opportunity for improvement is a big draw to the sport for Mead as well.

“I love track and running so much because every time you toe the line — or just go out for a run — it’s an opportunity to improve and do better than you did before,” she said.