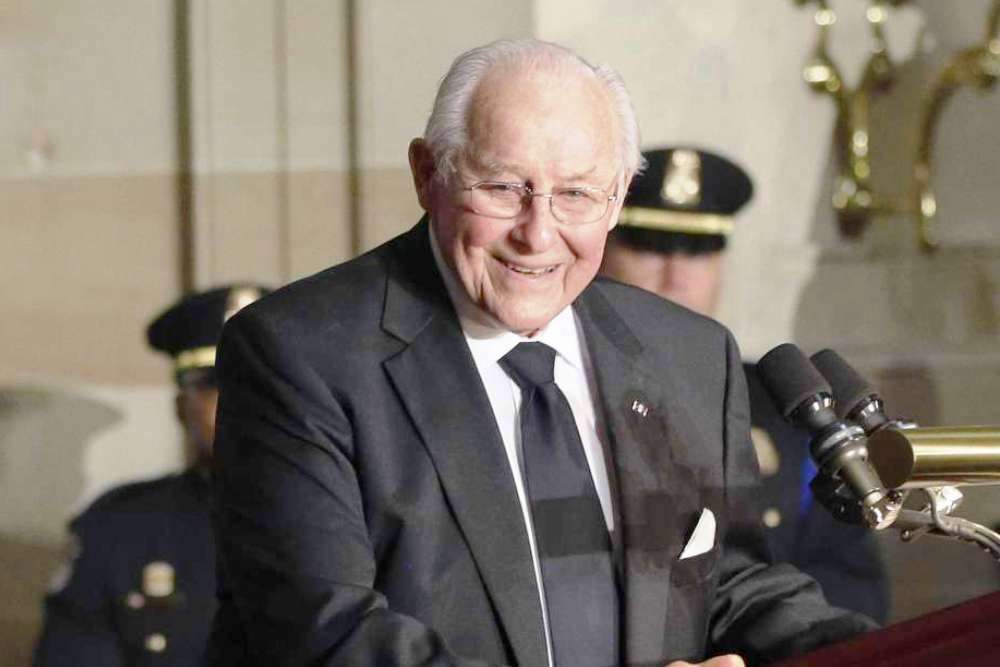 Remembered as “a titan,” a “war hero,” a “true gentleman” and above all as a skillful, diplomatic peacemaker, longtime U.S. Rep. Bob Michel has passed away at the age of 93, Capitol Fax announced.

Peoria native Michel (pronounced “Michael”) served as a Republican congressman from central Illinois’ 18th District for 38 years, including 14 years as the minority leader in Washington, D.C. An alumnus of Bradley University in Peoria, he was predeceased by his wife Corinne.

Michel represented central Illinois for 19 terms, according to Roll Call, which reported that the statesman truly embodied what could “play in Peoria.”

Many colleagues and constituents offered condolences and commemoration; state Sen. Dave Koehler (D-Peoria) even invoked Greek mythology in his tribute.

“Bob Michel was a titan of central Illinois politics,” Koehler told Capitol Fax. “His Midwestern values of civility, compromise and compassion will be remembered by his ability to work across the aisle to do what was best for his district and the country.”

Republican U.S. Rep. Rodney Davis, from Illinois, expressed sadness on Michel’s passing, calling him “one of the most respected members of Congress of all time.” Referring to Michel’s “incredible footprint,” Davis stated that Michel’s legacy will never be forgotten.

“Bob’s ability to reach across the aisle to make a divided government work for the people he represented was second to none,” Davis said. “My thoughts and prayers are with his family this morning.”

Referring to Michel as “a distinguished public servant and the proud son of Illinois,” Davis’ fellow U.S. Rep. Adam Kinzinger (R-16th District) tweeted that “Bob Michel was a selfless, principled leader. Today, we mourn his passing (and) remember the remarkable life he lived.”

“Our country is better for having the courage, patriotism and leadership of the honorable Bob Michel -- and I, like so many others, will continue to be inspired by (his) legacy,” Kinzinger added in a statement to Capitol Fax.

Illinois State Treasurer Michael Frerichs issued a statement this morning on Twitter, saying, in part, that “Illinois has lost a true gentleman and leader.”

While commenting that Michel’s replacement in U.S. Congress by Newt Gingrich marked the end of an era, Democratic U.S. Sen. Dick Durbin stated, “It has never been the same since.”

“Every politician alive should pray that, like Bob Michel, the last words said of him would be ‘the face of decency and public service,’” said Durbin, adding that there never was a more congenial opponent.

“We campaigned for each other’s opponents,” Durbin said. “But there was never a moment when we weren’t respectful and friends. His legacy goes beyond his years of service.”

Among other entities, the Illinois Republican Party made a statement, saying that both the state and the GOP “lost a true statesman.”

“Bob served our state and nation with honor and distinction both in uniform and in the halls of Congress,” Illinois Republican Party Chairman Tim Schneider said. “His reputation preceded him — Bob was a deft lawmaker, always ready to forge compromise, but never willing to sacrifice principle. More importantly, Bob Michel was a man of civility, respected by all on both sides of the aisle. The Illinois Republican Party sends its condolences to Bob’s family in their time of grieving.”

Colleagues far and wide concurred on almost all points as they commemorated the “true statesman,” referring to his diplomacy, Midwestern values, patriotism and courage.

Roll Call observed that Michel’s old school style worked to his full advantage, citing his “collegiality, collaboration, civility and courtesy as essential political virtues.” Remarking that he possessed no one superpower in particular -- “his leadership style was neither overtly charismatic nor consciously intimidating” -- the organization lauded Michel’s listening skills, flexibility and gentle approach.

“Congressman Michel was the definition of a public servant … beloved by all,” Gov. Bruce Rauner said in summary.